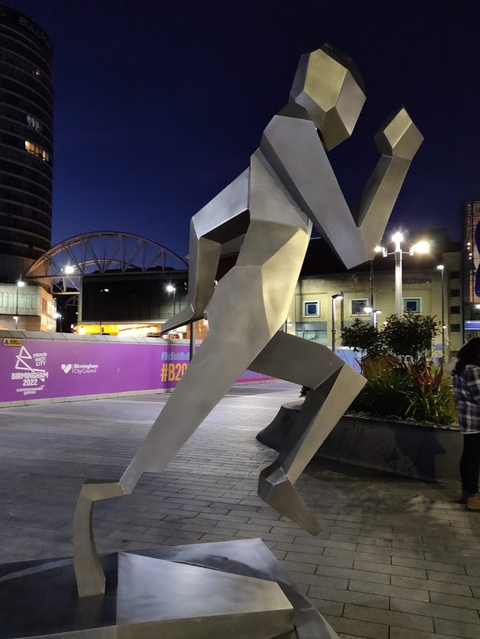 If you’re visiting Birmingham over the Commonwealth Games and Birmingham Festival 2022, we’ve put together a list of the top sculptures around the city centre to check out while you’re in the city.

The first sculpture on our list is One Giant Leap For Humankind, a brand-new sculpture designed specifically for the Commonwealth Games. The piece by Jacob Chandler features a strong athlete with bold lines. The installation takes inspiration from Birmingham’s industrial roots and cultural melting pot. It currently stands outside the entrance to Birmingham New Street Station on the Eastern Plaza.

If you’re interested in Chandler’s work, a limited number of scaled down versions of the sculpture are available in our gallery in addition to other Jacob Chandler sculptures.
2. The Bull – Laurence Broderick, 2003
Anyone watching the opening ceremony of the Commonwealth Games will have been impressed by the iconic 10ft Raging Bull which takes its inspiration from the next sculpture on our list: The Birmingham Bull.
Like the Bee with Manchester, the Bull has long been a symbol of Birmingham. Laurence Brodrick’s sculpture, The Bull, is made from solid bronze and weighs six tonnes. The sculpture stands off Rotunda Square outside the bullring shopping centre and was unveiled on the 4th September 2003 to a crowd of 279,000 people. In 2015 The Bull was included in The Independent's top 10 pieces of public art.

The Iron:Man has made a recent return to Birmingham in 2022 after having been held in storage since 2017. The statue by Antony Gormley, also known as the artist behind the Angel of the North, was originally erected in 1993. The statue returned to its home in Victoria Square earlier this year.
The Iron:Man installation was cast from iron in nearby Willenhall and nods to the areas industrial past. The artwork was originally commissioned by the TSB Bank in 1991, when they left the city there were concerns that TSB would take the sculpture with them. However, due to its weight of six tonnes, the artwork was allowed to stay in Birmingham.

A Real Birmingham Family depicts two sisters and single mothers, Emma and Roma Jones, with their children. The installation is the creation of Birmingham born and Turner prize winning artist Gillian Wearing. The bronze statue is located outside the Birmingham Library in Centenary Square. The family were chosen from a shortlist of hundreds of applicants, to depict a true representation of a family from Birmingham and shows what constitutes as a family can be fluid.

The River, known lovingly by locals as the Floozie in the Jacuzzi is the final sculpture on our list of must-see sculptures in Birmingham. The River depicts a female representative of life, and sits within one of the largest water features in Europe with a flow of 3,000 gallons per minute.
The River is located in Victoria Square and acts as the centrepiece of the Birmingham 2022 Festival and Commonwealth Games coverage.

Here at Colley Ison Gallery, we’re excited to feature the work of Jacob Chandler as part of the Commonwealth Games Festival Summer Exhibition which runs til the 9th September 2022. The Exhibition also introduces Goldie, who we are proud to be showing for the first time alongside our established gallery artists. For more information about the Gallery or our artists, please don’t hesitate to get in touch.