Chat with us
x
Go Back 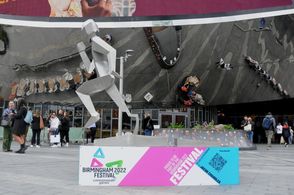 “One Giant Leap for Human Kind” has been designed specifically for the Birmingham 2022 Festival celebrating the Commonwealth Games.
The figure, stripped of colour, creed and gender, is a reflection of the melting pot that is the Commonwealth, all people together as one, show-piecing the excellence of humankind.

The piece which features a sprinter exerting their maximum power fits perfectly into both the festival and Chandler’s own body of work.

Inspiration for the piece came from first hand experience of the 2012 Paralympics as well as from an introduction to Ben Pearson, a T64 Sprinter with hopes of being part of the 2024 Paralympics. Ben’s story resonated with Jacob’s own with both being affected by a life altering injury / health condition. Despite this they both are finding ways to excel despite adversity. Chandler has found this project cathartic, he has often felt the need to hide his own health conditions but the inspiration gained from studying and just simply talking to the phenomenal athletes involved in the project has helped Chandler open up about his own struggles with Colitis and Ehlers Danlos Syndrome.

For the first time in Chandler’s work includes a cast stainless steel element. The opportunity to explore this technique was offered through generosity of Grainger and Worrall and feels particularly poignant as iron is in Chandler’s blood. He still works with pattern making foundry tools from his ancestors time working in Ironbridge and while designing the piece, made use of his Grandfathers anvil dating back to the Lilleshall Company’s steel rolling mill. Bringing the metal working heritage of Birmingham, the Black Country and his own ancestors into this piece make it truly resonate. The machine-like piece also naturally link with the West Midlands car manufacturing tradition.