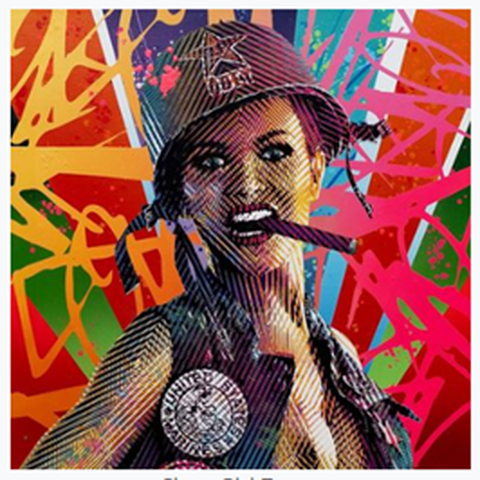 Goldie is a British artist, born in 1965 as Clifford Joseph Price in Walsall, West Midlands. He grew up in nearby Wolverhampton and was raised in care by several foster parents. In the late 80s, he made his name as a graffiti artist in the West Midlands before finding success as a musician in the 90’s. By 2007 Goldie made a return to the art world with the exhibition Love Over Gold in London.

Today graffiti can be found in most urban areas. With impressive street art and murals boldly displayed in cities like Bristol, Birmingham and Manchester. However, in the 1980s the graffiti movement was relatively new in the UK as an emerging artform.
In 1988 documentary filmmaker Dick Fontaine released Bombin’ on Channel 4. Offering a fascinating look at the UK’s hip-hop and graffiti culture in the 80s. The documentary heavily featured Goldie’s work and the Trans-Atlantic Federation, a collective of UK and US based graffiti artists co-founded by Goldie.

Goldie is known as one of the pioneers and revolutionists of Jungle and Drum and Bass. In 1992 he contributed to his first track Ruffige by Icelandic group Ajax. And in 1994 set up his own record label Metalheadz.
In 1995 Goldie released his first studio album, Timeless. The album featured jungle breakbeats and soul vocals - the album popularised drum and bass in the UK.
1998 brought Goldie’s 2nd album, Saturnz Return, and featured collaborations with musical heavyweights David Bowie and Noel Gallagher.
Today, Goldie is still creating music, and in 2020, Goldie launched a new record label, Fallen Tree 1Hundred. 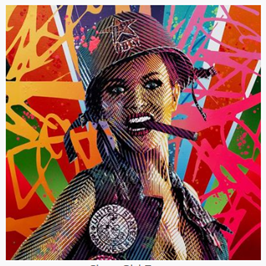 In 2007, Goldie made his return to art with Love Over Gold. In 2008 he teamed up with esteemed DJ Pete Tong to provide the artwork for the Wonderland club night at Eden nightclub in San Antonio, Ibiza.

Since 2008 Goldie has exhibited in galleries across the world including Berlin, London and Tokyo, and more recently opened his own gallery in Bangkok. Here at Colley Ison Gallery we have a limited amount of original spraypainted pieces by Goldie on display and available to purchase.

In 2020 a documentary about Goldie was made by Sky Arts. Goldie: The Art that Made Me delves into the Goldie’s personal journey and creative influences.

If you’re interested in finding out more about Goldie, you can view some of the art we have available online on our artist page. Or, to view the work in person, our Birmingham Gallery is open  from 10am-6pm Monday to Friday or 10am-4pm on Saturdays. Private appointments are also available and can be arranged by contacting our helpful team.