Andy Warhol has long been considered one of the most influential contemporary artists of the 20th Century. Warhol was born to humble beginnings in Pittsburgh, Pennsylvania, in the 1920s. However, by the Sixties, Warhol had risen to international fame due to his pop art paintings, including Campbell’s Soup Cans and Marilyn Diptych.

Warhol’s work is proudly displayed in galleries across the world, with works on display in the Tate Modern, Halcyon Gallery in London. Here at Colley Ison Gallery, we’re excited to show you one of the largest collections of Warhol’s works outside of London, with works that cover a huge span of his illustrious career. Running from 14th January to 11th February, the forthcoming exhibition is free to attend at our gallery in Birmingham.

The large number of works on display in our unmissable exhibition include remarkable pieces from the start of Warhol’s career as well as notable pieces from the peak of his artistry and later works including some of the rarest prints held in any collection.

This early lithograph has the hallmarks of Warhol’s signature style, with thick blotted lines. The image depicts a tattooed woman covered from head to toe with logos of famous brands of the time, like Channel No 5, Kellogg’s and Lucky Strike Cigarettes. Warhol’s contact details are scrawled across the front of her skirt, playing into Warhol’s unique way of selling himself to prospective clients.
If you wish to view this Lithograph, the exhibition in our gallery in Birmingham is free to attend, and all works are available to purchase. 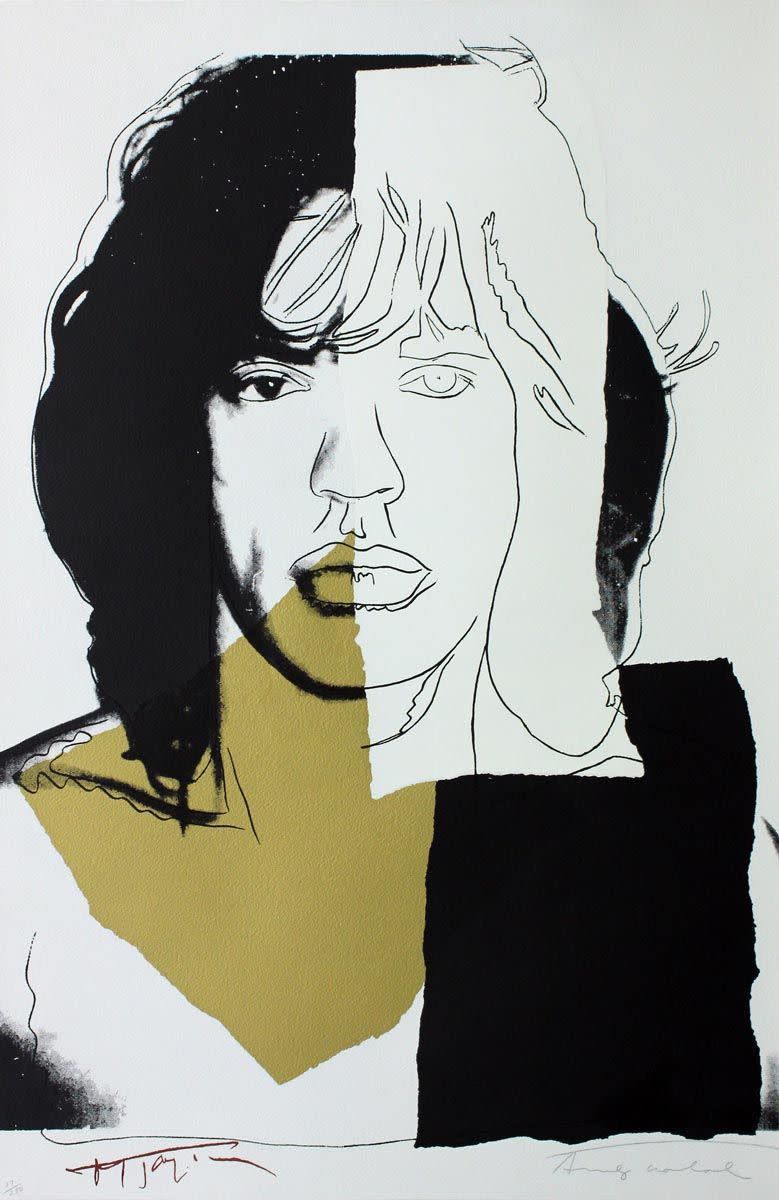 Warhol’s portrait of Mick Jagger is signed both by the artist and by Mick Jagger himself. The screen print is reminiscent of his earlier portraits, like his pop art prints of Marilyn Monroe. However, the colours used are much more minimalistic using the colour palette of black, white and gold.
The series of images of Jagger isn’t the first collaboration between Jagger and Warhol. With Warhol lending his talents to the album artwork for Sticky Fingers. Warhol’s relationship with Jagger is evident in the screen print as it captures a sense of intimacy. This screen print is perfect for fans of the Rolling Stones and Warhol alike, and, as with all works on exhibit, the Mick Jagger screen print is available to purchase. 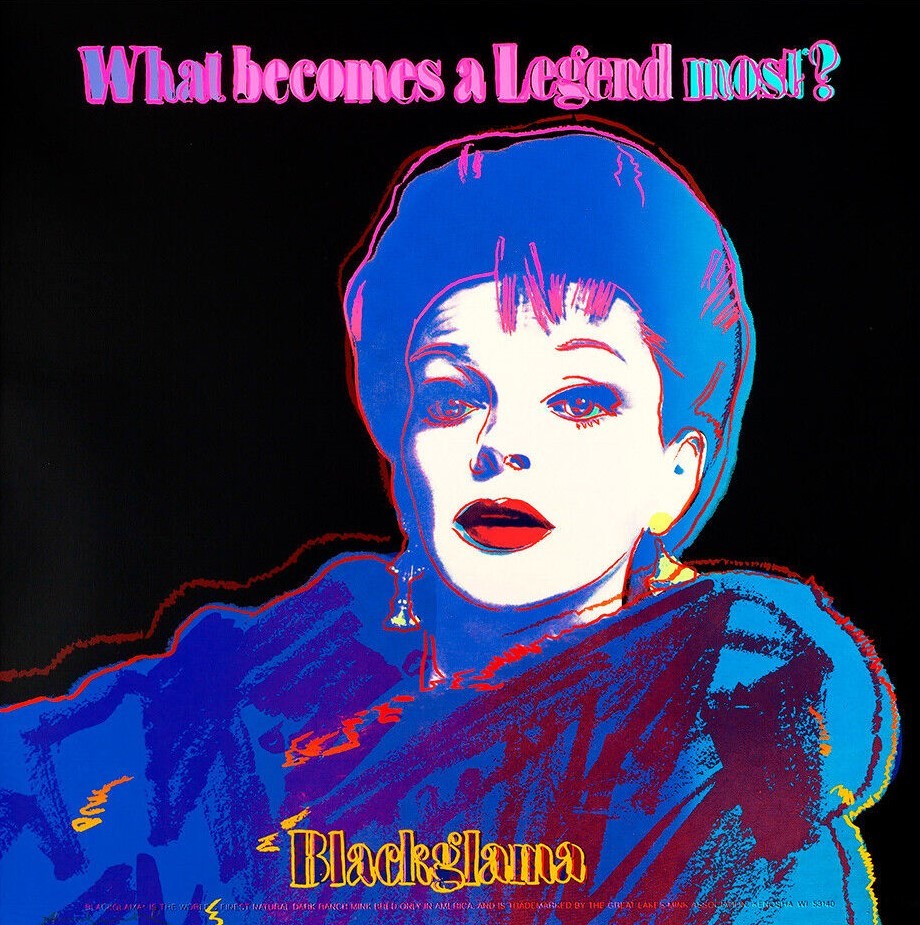 Warhol’s past in advertising carried through into his artistic career. This signed screen print of Judy Garland is inspired by her famous 1968 Blackglama advertisement, which promotes mink coats. The artwork features a stark black background which is electrified with neon pinks, blues and purples, following Warhol’s signature style of celebrating pop culture and celebrity status. Like all works on display, Blackglama is available to purchase. 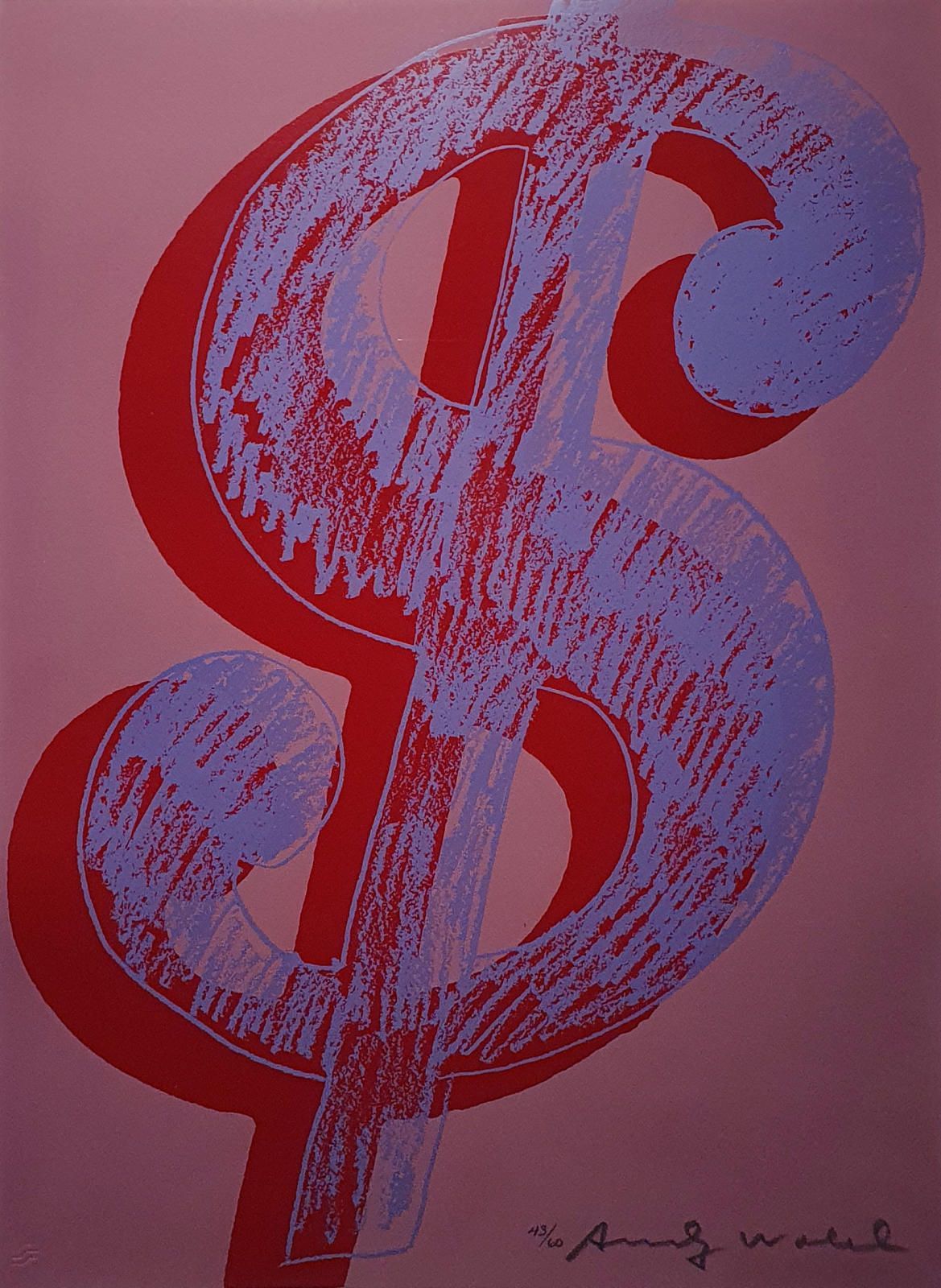 Having come from a poor background to transforming into one of the wealthiest artists of his time, Warhol was open about his love of money. Famously quoted as saying, “making money is art”. His earlier works show his love of money with such pieces as 200 One Dollar Bills - this carries through to this 1981 signed screen print of a dollar sign. Again, this print is available to purchase online or at the gallery. 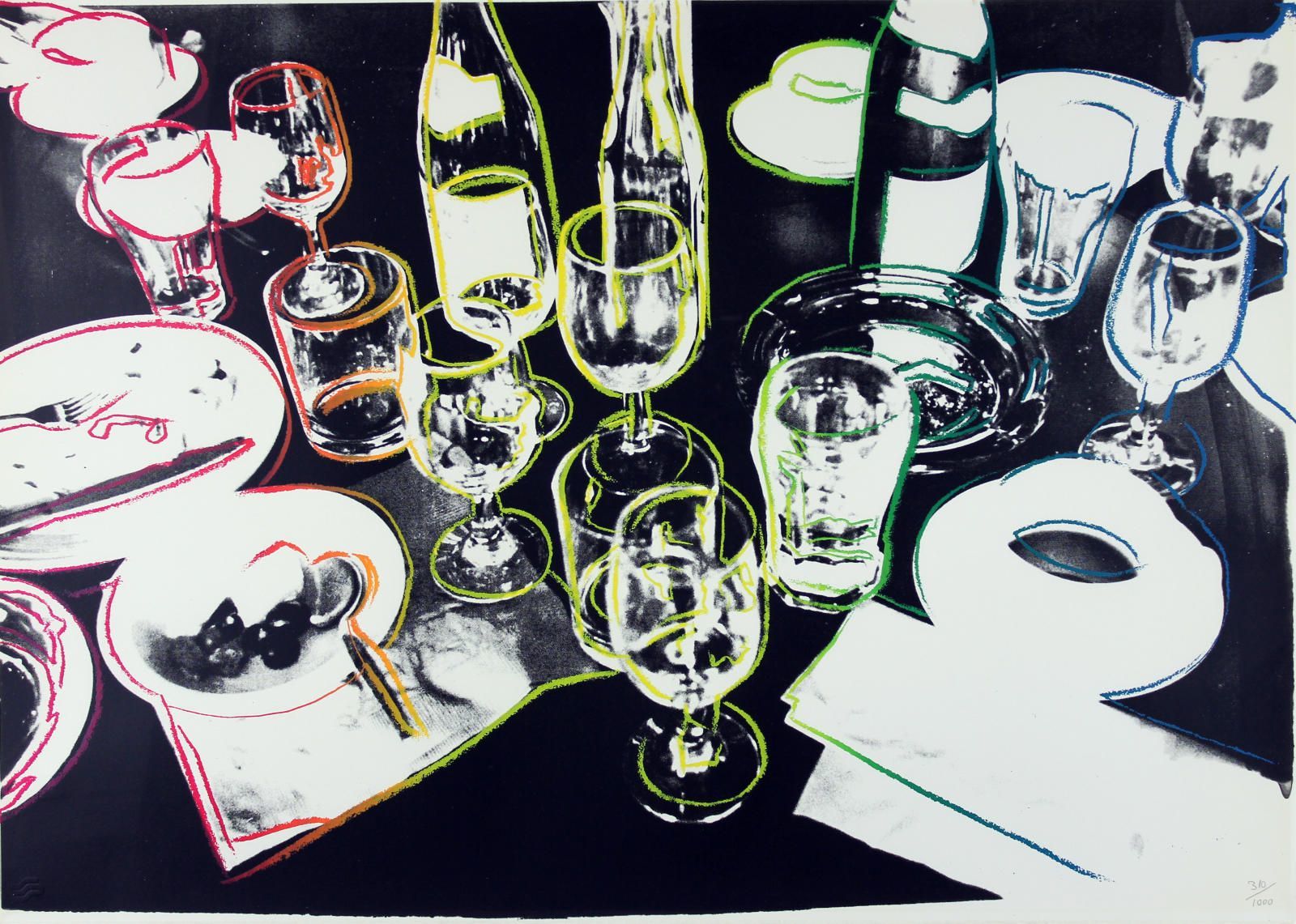 After the Party, is a rare signed screen print which depicts the chaos of Warhol’s party lifestyle. The black and white image is highlighted with rainbow outlines which signify the wild yet fun parties. This screen print can be purchased both at the gallery or online. 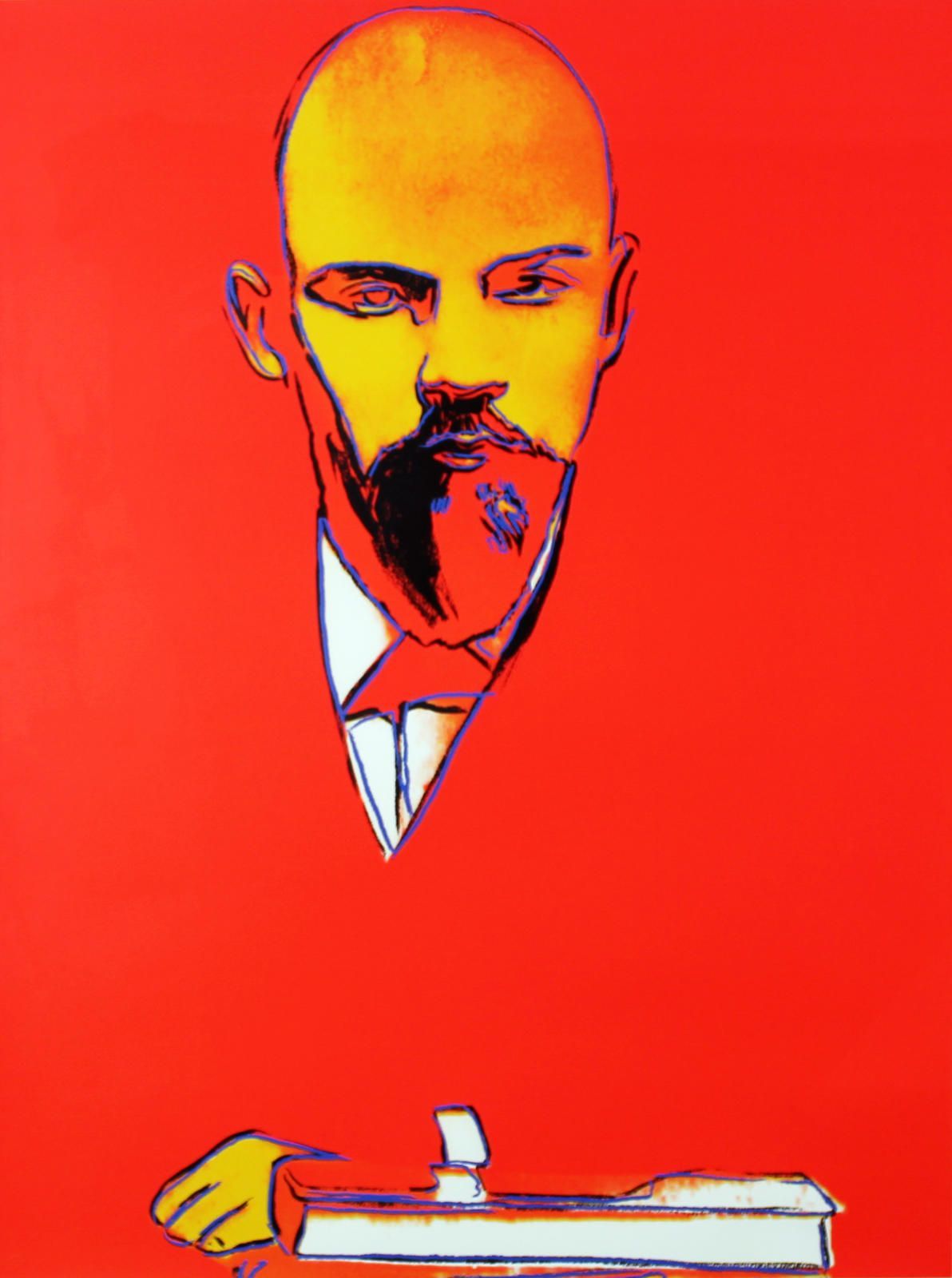 Warhol’s silkscreen on Paper of Lenin is one of his later works, the piece is Estate Stamped as he passed away before he had the opportunity to sign it. Warhol was fascinated by political leaders in addition to celebrities and pop culture. Lenin is pictured here in a deep red which symbolises the Russian Revolution. To purchase this print, come along to the gallery or purchase with Artsy.

Lenin in black is one of Warhol’s last pieces of work before his death in 1987 - the minimalistic print sets Lenin against a dark background with minimal lines. This collectable piece is available to purchase at the gallery or online. 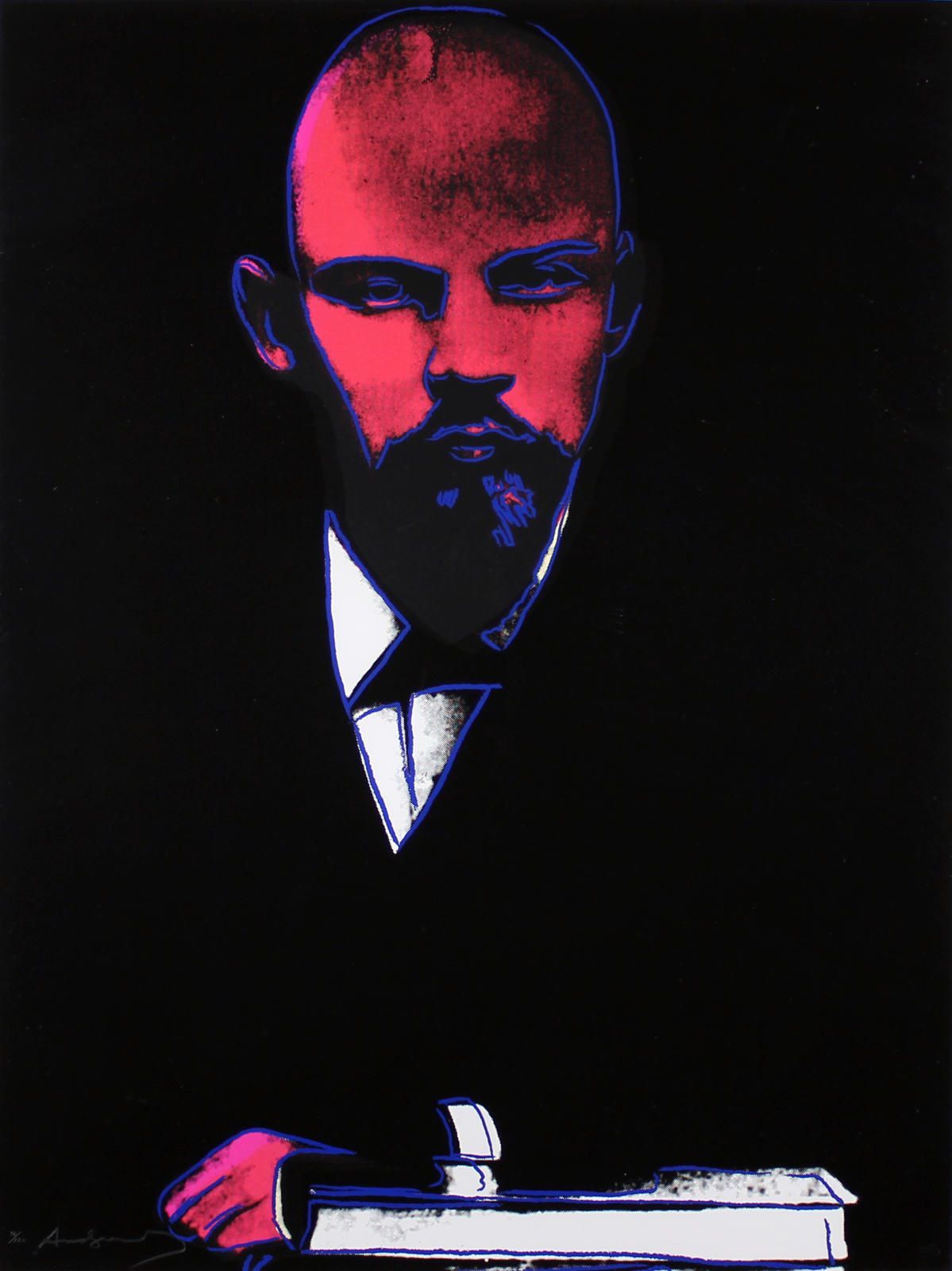 This major exhibition is one not to be missed. It brings together a full mix of original works on canvas, paper and signed silkscreen editions. In addition to the notable works, we’ve listed in our blog, there are a large number of pictures in the collection, which is one of the largest outside of London. This exhibition gives you the opportunity to experience Warhol’s work in the intimate setting of Colley Ison Art Gallery, the exhibition runs from the 14th of January to the 11th of February 2023 and follows the artist’s work from 1955 to 1987. All pieces are available to purchase, and admission is free. Visit us at 85-89 Colmore Row, our opening times are 10-6pm Monday-Friday and 10-4pm on Saturday.